Elixir for the Lazy Impatient and Busy: Part 5 Streams, Streaming and Dynamo!

It’s been a while since my last post. Work has been crazy, and I was busy reading all about Erlang, a little bit of Clojure, and an even tinier bit of Haskell. Enough excuses though, let’s get right to it!

Today, we will be taking a first dip into Dynamo, the web framework powered by Elixir. We will be building something fun along the way, to demonstrate what are Streams and Streaming.

The application you are going to build today will show you the awesomeness of server side events (SSE) and its trivial implementation in Dynamo. 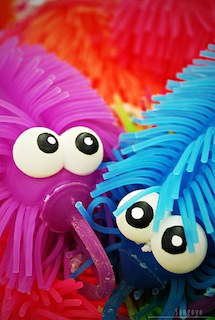 In particular, the application will:

You, on the other hand, will:

Getting Started with Dynamo

Assuming you already have Elixir installed, and too lazy to read the excellent installation instructions, here goes:

Fire up your terminal. I am assuming everything is done on the home directory.

Before I go on any further, let me clarify that Streams are not the same as Streaming. They are completely different concepts altogether.

Streams are nothing new actually. Clojure, Haskell, OCaml all have them. In order not to feel left out, Elixir v0.10.0 was released with support for Streams.

A stream is possibly an infinite list. Reading a file can be represented as a stream:

Reading a file obviously isn’t infinite. On the other hand …

The short story here is that Streams are lazy, meaning the computations are only performed at the very last moment. This is what makes the representation of infinite lists possible.

So, I hope it won’t take you much convincing to figure out why this is a bad, bad idea:

There are many other goodies covered in the documentation.

We are going to implement server-side streaming. For that to happen, our Dynamo project (that the official term, project, not application) will have to generate a response using the text/event-stream MIME type.

In particular, our response needs to conform to the Event stream format.

The short story is that we want our server to generate a bunch of data continuously. No refreshes, no Ajax callbacks.

Back to Dynamo now!

Side note: I’ve seen some people compare Dynamo to Rails. I really think it looks more like Sinatra. Also, I’ve been doing Rails for quite a while, so I was pleasantly surprised that a web framework could start up that quickly … :X

Let’s go ahead and add a route called /stream:

Then navigate to http://localhost:4000/stream to confirm everything works OK.

Let’s modify the route. In order to simulate streaming, we need something continuous to simulate an endless stream of data (see what I did there?).

In our example, let’s generate a bunch of random numbers:

Recall that in order to implement streaming, our server needs to package the response in a text/event-stream MIME type. Within the route block, add this:

send_chunked spits out the response immediately.

Notice that we keep reassigning the conn variable. Always remember that Elixir data structures are immutable. The connection (conn) is a data structure too. So the only way to capture the effect of the operation is to assign in to another variable.

Here comes the fun part! We want to keep outputting an endless stream of random numbers

Now, let’s see what you have accomplished. Go right ahead to http://localhost:4000/stream and be mesmerized by an endless stream of random numbers. Yay!

Getting this to work on the front-end

There’s another piece of the puzzle that we have yet to figure out, and that is getting our data read.

Here are the absolute bare minimum Javascript to get started:

So, I’ve hooked up /stream to a d3.js graph. Here is how it looks like: 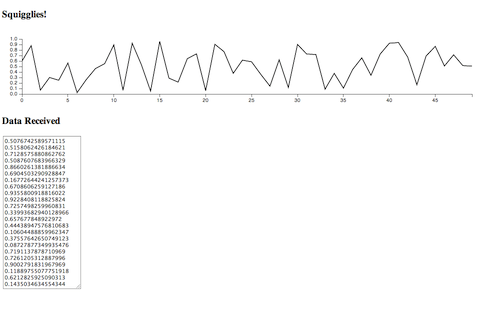 Here’s the live version and the source.

This was surprisingly easy. (Assuming you already have the Heroku CLI installed, and you have pushed your project to git.) Here’s the lazy man/woman version:

Go the the directory of your app, then:

The last line would be the URL that you will use to spread the Elixir love <3.

I hope you enjoyed this tutorial, and maybe give you a little inspiration for interesting things to build with Dynamo. Do share in the comments any interesting ideas that you may have!